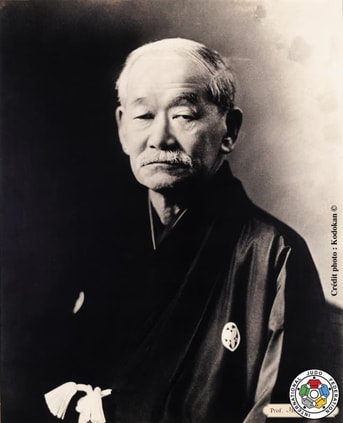 In May 1882 Jigoro Kano was inspired by traditional forms of combat to create a method of physical, intellectual and moral education, which he named judo.
Initially considered as a self-defence system, judo is step by step recognized for its educational value, its benefits for the development of the body and the character.
Judo became an Olympic sport in the Tokyo Games in 1964, and thus became universal. The International Judo Federation today brings together more than 200 national federations and 5 continental unions.

The Judo of Kano: Philosophy and Education
Small and bullied by his classmates, Jigoro Kano wanted to strengthen his body and learn to defend himself. He studied Jujutsu but soon realized that the fight focused on a powerful body and not on the spiritual and educational dimension of people.
Kano removed the dangerous Jujutsu techniques, by improving the art of falling. He imposed that both fighters grab each other and created his own method by synthesizing the oldest forms of defence. In 1882, he opened a dojo that he called the Kodokan, the "Place where the way is studied".

Kodokan  Judo
Judo techniques were divided into three categories: throws or nage waza, controls or katame waza and kicks or atemi waza. In competition, atemi waza are not allowed.
Judo is taught through randori, free practice, kata, imposed forms, and mondo, exchanges based on the values, the philosophy or any subject related to judo, between the students and their teacher.
The emblem of the Kodokan is an octagonal mirror, the symbol of truth, the central red circle expressing a right and sincere spirit.
​
​In 1922, Kano created the Cultural Society of the   Kodokan. He writes the two maxims that define the philosophy of his method:  Seiryoku zenyo ("The best use of energy") and   Jita Kyoei ("Mutual welfare and benefit").
In 1909, Kano was appointed to the International Olympic Committee. He became the first IOC Asian member and devoted his life to the development of education through judo and through sports in Japan and around the world.